Don’t take our word for it, read more about our case studies here

It goes without saying that choosing an online marketing firm with a long, proven track record is critical to your business’s success. It is unfortunate that these days there are loads of people that call themselves “PPC specialists” but in reality have little to no experience optimizing campaigns. Pay per click marketing is a fine science that takes more than a few simple tricks to really get your company the results it deserves.

So how exactly do you separate the pretenders from the agencies that really know what they’re doing?

Our belief is it all comes down to proof. A really good PPC company should be able to show you substantiated examples and case studies of limo businesses that they’ve gotten incredible results for. I’m not just talking about leads, I’m talking about leads that turned into bookings.

Below are results from different clients we’ve worked with across the United States who work in very competitive markets. We have been able to get these companies excellent results on their respective markets.

Blue Nile Livery is a Boston based limousine company. They own several sedans and SUVs and focus on airport and corporate work for the most part, with some retail work to fill in the weekends. Nebyou Mogues founded the company in 2015 and has since been trying to aggressively grow it.

Nebyou first spoke to us in February of 2017 (at the time, our business was named ‘Clix Profit’). At the time he was frustrated as he had been through 5 different marketing companies. They all promised results but were short on delivery.

Nebyou was a few months away from going out of business. Watch the interview to find out what happened next…

Ultimate Limousines is a limo company based in Riverside, CA. With close to 50 vehicles, they are not a small operation and handle a wide variety of services and offer both retail and corporate limo services. Andy Wagner founded the company in the 80s and has been dominating his market since.

Andy first spoke with us back in August of 2016 (at the time, our business was named ‘Clix Profit’). He was currently working with a company that was helping him with his online marketing, but unfortunately he just wasn’t getting the number of leads he knew he could for the budget he was spending.

Andy was nowhere near going out of business, but he wasn’t as profitable as he could be due to not having the lead volume it takes to keep close to 50 vehicles busy. Watch the video where he explains what it took to take his company to the next level…

Crown Limo LA is a Los Angeles based limousine company that has been providing the best customer service and vehicle selection in the Los Angeles area. David Navon founded the company in the 90s, and since then has been running a very successful operation.

David first spoke with us back in April of 2016 (at the time, our business was named ‘Clix Profit’). He had been working with a company that had been helping him out with his pay per click campaigns, and sending him reports of how those campaigns were performing. He thought everything was well and good, until we started reviewing the reports with him. Come to find out, things weren’t as good as the company made them out to be, and he wasn’t getting nearly as many leads as he thought he was.

Davids business was already successful, but he knew in order to take his business to the next level, he needed more leads for what he was spending; he also knew he needed better sales systems that would help him automate follow up, something very few limo companies do.

Watch the video below to see how David and Limo Marketer have taken Crown Limo LA to the next level!

Cali Party Bus is a SF based party bus rental company. They also have offices in the San Diego market.

Matt Berger, the owner of Cali Party Bus came to us in August of 2017 (at the time, our business was named ‘Clix Profit’). At the time, he had been with other agencies who were generalists (they didn’t specialize in the transportation industry) and because they worked with lots of other industries, they didn’t have the intimate knowledge it takes to really take his business to the next level.

Matt decided to give us a try and was impressed with the results. Find out more in the interview!

Five Star Transportation is a San Diego based limo company that up until about a year ago just focused on corporate and airport car services.

Adrian Davis, the owner originally spoke with us in April of 2016. He used our service for a while but ended up trying out some other companies. He came back to us in October of 2018 with a new plan. He wanted to start going after Charter Bus business, because he saw that the airport/corporate car service market was just too saturated, and wasn’t profitable anymore.

Check out the video to see what his experience has been like since he started working with us again.

Note: Adrian saw the writing on the wall for the airport car service industry. Since he has switched to targeting larger vehicles the profit he makes has increased drastically.

Knox Affinity Limo is based in Salt Lake City, UT, and focuses on airport and corporate transportation.

Holly Knox came to us back in August of 2018. She knew she needed to start doing online advertising if she was going to start to increase the amount of business she was getting.

Find out how Holly what Holly’s experience has been like so far with Limo Marketer in the video!

John Guerrieri with Dream Limousines started working with Limo Marketer in December of 2018. At the time, Dream Limousines was already doing very well in their organic search, but was looking to drive even more traffic and leads via pay per click marketing.

Fast forward to June of 2019, and they are receiving approximately 300 leads a month from pay per click ALONE.

In the video, John explains what his experience has been like so far with Limo Marketer!

Justin Plackett from A&J Limousines started working with Limo Marketer (formerly Clix Profit) in March of 2018. At the time, he had tried out several different agencies only to end up disappointed. Within 60 – 90 days they started realizing that the increase in bookings was directly attributed to the work being done by Limo Marketer.

Fast forward a year and they have seen a large increase in profits (watch the video to find out how much!)

Watch the video to see Justin explain the results in his own words!

Michael Hammi with Diego Party Bus started working with Limo Marketer back in October of 2018 to manage is pay per click campaign. The results from the campaign were outstanding, and he was flooded with leads.

The only issue was, Mike just didn’t have the staff or time to follow up with all of these leads himself. He knew follow up was crucial but without the time or the staff he resigned himself to hoping they would book upon the first quote.

After speaking with Mike about this we decided he should give our follow up system a shot, as even booking a few extra jobs a month would make it worth it, and he was average 15 – 20 quote requests a day.

Within a few days of it being setup, Mike saw a very big difference in the number of people getting reengaged through the automated emails. On the first automated email alone, he was getting close to a 40% response rate.

Watch the video to find out how Mike has been liking the system! 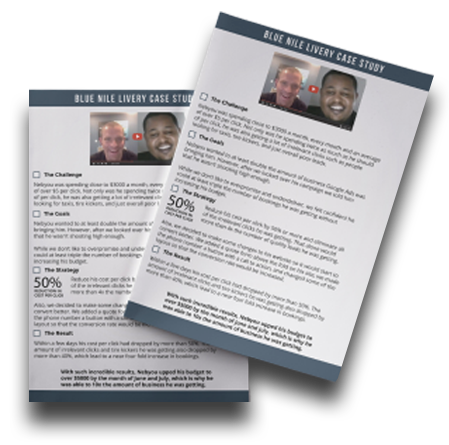 I just recently interviewed a Boston Transportation Company that was months away from going out of business. In this case study you will find out the EXACT strategies we used to take him from an owner/operator, to the head of a successful transportation company with 5 vehicles and 5 full-time chauffeurs.

You will find out that with the right marketing system in place, anyone can have these same results.

GET MY CASE STUDY

You’ve worked hard to start your business and keep it running. Now it’s time to really stand out from the local competition by taking your online marketing efforts to a higher level. We can help you secure TOP placement on Google for the majority of the Limousine related keywords in your area, as well as manage your overall online presence. However, we only work with ONE company in each city, so call us at 855-255-LIMO before your competitor does. 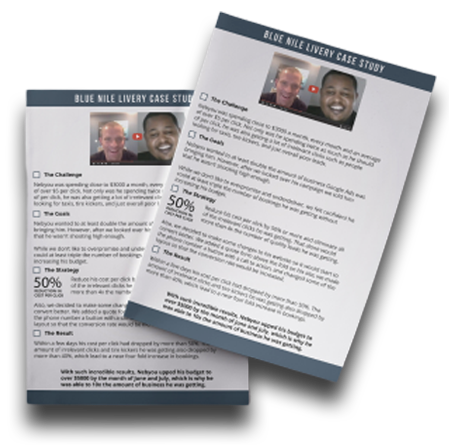 We hate SPAM and promise to keep your email address safe. Enter your email address below and reserve
your seat… it’s 100% FREE!